Marriage in church after divorce

The Church of England teaches that marriage is for life. It also recognizes that some marriages sadly do fail and, if this should happen, it seeks to be available for all involved. The Church accepts that, in exceptional circumstances, a divorced person may marry again in church during the lifetime of a former spouse.

If you are thinking about asking to be married in church, you should discuss this with your local parish priest. Please do this well before choosing a date for your wedding. Some priests may be willing to take such a marriage, others may not be prepared to do so, on grounds of conscience, and may not allow the use of their church either. The law of the land permits them this choice.

If your parish priest is willing to discuss the possibility of conducting your marriage, he/she will want to talk to you frankly about the past, your hopes for the future and your understanding of marriage. You and your intended spouse should therefore be prepared to consider some questions. You are advised to reflect beforehand on the issues they raise – and should be prepared to answer them honestly. 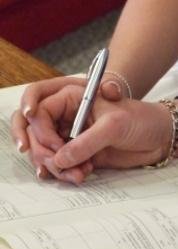 • What does marriage mean to you?

• What have you learned from your previous marriage?

• Has there been healing of past hurts?

• If you have children, how are they being looked after?

• What do others think of your marriage plans?

• When did your new relationship begin?

• Have either of you been divorced more than once?

• Are you wanting to grow in the Christian faith?

You will also need to provide written legal proof that any divorce decree is absolute.

(A decree nisi will not be sufficient.)

If it is not possible for your proposed marriage to take place in church, your priest may consider other alternatives with you. If your priest agrees to conduct a marriage service, you will be invited to take part in marriage preparation, some of which will be with other couples.

If you are divorced and want to be married in our church, these are the questions which the Vicar will consider with you:

a) Do the applicants have a clear understanding of the meaning and purpose of marriage?

Do the couple understand that divorce is a breach of God’s will for marriage?

Have they a determination for the new marriage to be a life-long faithful partnership?

(b) Do the applicants have a mature view of the circumstances of the breakdown of the previous marriage and are they ready to enter wholeheartedly and responsibly into a new relationship?

Does the divorced person appear to be relatively free of self-deception and self-justification about the past?

Did the divorced person take the first marriage seriously and has he/she learnt from mistakes?

Is the other party aware of the possible cause(s) of the breakdown of their future partner’s previous marriage?

Is there an attitude of repentance, forgiveness and generosity of spirit so that the applicants are free to build a new relationship?

(c) Has there been sufficient healing of the personal and social wounds of marriage breakdown?

Has there been enough time and distance for the parties concerned to recover emotional stability and good judgement?

Are there any extant court proceedings relating to the former marriage?

Are responsibilities to the children of any previous marriage being recognised and honoured?

(d) Would the effects of the proposed marriage on individuals, the wider community and the Church be such as to undermine the credibility of the Church’s witness to marriage?

Would the new marriage be likely to be a cause of hostile public comment or scandal?

(e) Would permitting the new marriage be tantamount to consecrating an old infidelity?

While it would be unreasonable to expect that the couple should not even have known each other during the former marriage(s), was the relationship between the applicants – so far as you can tell from the information made available to you - a direct cause of the breakdown of the former marriage?

(f) Has either of the parties been divorced more than once?

In the case of multiple divorces, the sheer complexity of relationships that may have developed will inevitably make any assessment by you more difficult. However, the Church witnesses to lifelong marriage, and should not find itself being a party to “serial monogamy”, hence neither of the parties should normally have been married and divorced more than once.

(g) Do the applicants display a readiness to explore the significance of the Christian faith for their lives so that their further marriage is not an isolated contact with the Church?

Given that the provision of careful marriage preparation should be the norm for all couples seeking marriage in church, do the applicants possess an understanding of the need of God's grace in relationships and show a willingness to be open to Christian teaching?

Normally, it will be clear as you go through these questions whether a wedding in church will be possible, however, the Vicar may take a week or so to consider and pray before making a decision.